I wanted to let you know that you matter. That they’re listening. Here’s how I know:

I have a 9 year old boy. This season was his first playing basketball and this week-end, his first tournament. Now, as tournaments go, it went pretty well. Two solid wins and 2 very close losses…one by 2 points, in overtime.

But, here’s the thing about my boy: He’s wired to win.

Oh, I don’t mean that he always wins (please see last post 😉)What I mean is that he cares…DEEPLY about the outcome of each and every athletic event he has ever participated in. Pick up games at recess? All in. Flag Football? Like he thinks he’s at the SuperBowl. Every game. Every time. Go hard or go home.

At this point, he’s played in 100’s of games, and I’ve never seen him give less than 100%…not once. (Admittedly, I’ve missed a couple, but you get the idea.) I’ve never heard him blame a teammate after a loss, either. After a loss, he runs through the game in his mind. And when he does, he finds the mistakes he  made during the game, and he thinks about what he should’ve done. And then he practices it. Now, you and I know that no team sport is ever won or lost by one kid. I bet if I asked him, he knows too. He’s certainly been told. I’m just not sure he believes it.

After today’s game, I saw a coach from a team waiting to play walk up to him. He’s a bit of a giant and a complete stranger, so my radar went off and I watched. He said a few words, Paul gave a quick nod, and he walked away. I saw the same thing happen a little bit later with a different coach (also huge…where do they get these guys?). Like any decent mama, I asked him what the strangers had said. “I don’t know,” he said “I wasn’t listening.”

This kid is lucky in a lot of ways, but he is especially lucky when it comes to the coaches – and teachers – that he gets. It’s actually a little odd, the way he manages to end up surrounded by people who understand exactly where he’s coming from. And so, naturally, his coaches talked to him, too. All positive, all the time. That’s how they roll. He remembered none of it.

Hours later, he shared. He told all about the positive things they said. The details of the words don’t really matter here…but they do to him. The kindness matters.

So thank you, Giant-Intimidating-Stranger-Coaches-Who-Are-Actually-Awesome. And thank you to his regular coaches and teachers, too…we already knew that about you.  Thank you for looking out for my boy….for understanding his “wired to win” intensity. And for meeting him, right there where he is on the floor of the basketball court, and making it better when he didn’t. 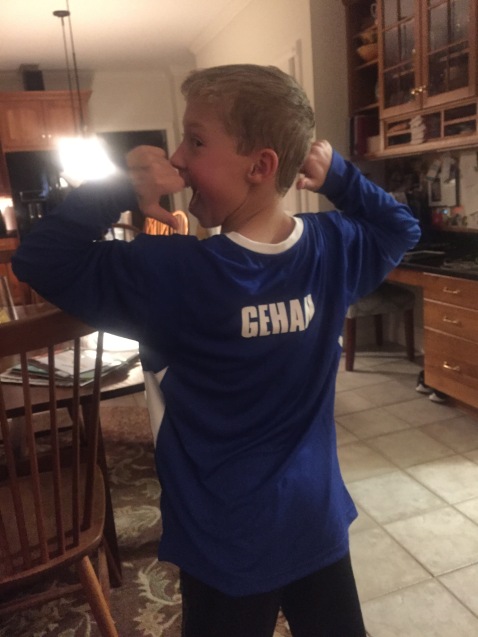