I read a lot of books. I read fiction and non-fiction…and occasionally I read trashy romance novels…because life is about balance. My favorite books tell me a story about a life that’s nothing like my own. I love the window into another world…another culture…another way of thinking. The best books take what I used to think and flip it on its head. (Malcolm Gladwell is great at that…if I ever met the man, I think I might actually swoon.)

A while back, I read a book for bookclub. It was a novel, but the themes were sharp and provocative and the story was well-told. It was a book that made you think. It slammed head-on into race issues and gender constructs and socio-economic problems and the responsibility that the privileged have. Or don’t have. It also talked how they should feel…those people who have been kissed by the gods and seem to live charmed lives. Should they feel guilty? The author seemed to think yes. I thought no. There was a big discussion about it and it was all a little confusing, but it made me think. For weeks now, off and on, I’ve thought about that book.

Sunday, I was not thinking about that book. Sunday, I went to the Red Sox game. It was a beautiful blue-sky day…the perfect day to see a game. We only decided Friday night that we wanted to go, and we needed 5 seats together, so we ended up sitting up in the pavilion area. The pavilion level has a big open area just behind the last row of seats with picnic tables and pub seating and a bar to lean on as you watch the game. There are walkways that look down onto roof gardens and a nice breeze. It was so pleasant back there that I never actually made it into my seat…I stood just behind it instead. There was a gate at the end of our area with a security guard standing there. Each time I walked by to go to the concession stand, or just walk around a bit, he would open the gate for me and smile. I remember wondering if they had extra security there because of the marathon the next day. Around the 7th inning my husband told me that he was going to head downstairs to find a restroom. Oh, you don’t need to go downstairs, I said, there’s one just through there. He went and looked and came back and explained that there was a guard standing there…and a barricade. Oh no, I said, he’s just there to help. He’s really nice. He offered to carry our drinks back for me last time! And so he went again. And the guard told him that the area was off-limits…he had to go back the other way and head downstairs. 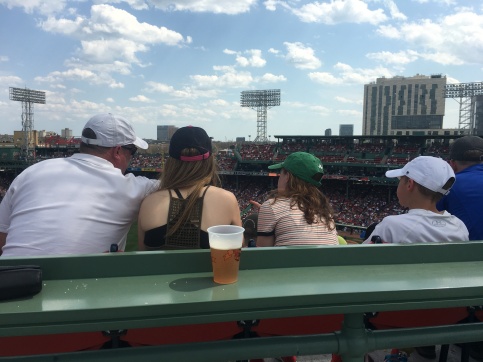 I think it’s possible that there may have been a little gender-privilege at play on Sunday. (Whether I got to go through because I’m female…or he didn’t get to go through because he’s male, I don’t know.) For the record, I continued to use the nice bathroom after this revelation. I probably should’ve staged some sort of protest and schlepped downstairs in solidarity, but I didn’t. The allure of a clean public restroom overrode my need to fight the good fight on behalf of my husband. And he’s fine, by the way. Completely unscathed by the experience. 😉

Anyway, it made me think. Nine innings of baseball in the sunshine after I’ve had a couple of beers makes me kind of philosophical. (Also sunburned.) What I saw as a gate…because for me it was a gate….he saw as a barrier. He was right, as it turns out, but until he pointed it out to me, my experience that afternoon was that there was a nice man watching over my section and ready to carry drinks to my seat if I needed help. I didn’t question it, I assumed that’s the way it would be for everyone. And I didn’t experience it as a barrier. Because it wasn’t one. For me.

I try not to spend too much time worrying about why other people do what they do. On a good day, I can figure myself out. But Sunday, I spent the rest of the afternoon people watching. Walking down Newbury street, there are people who move out of the way and people who others move for. I couldn’t quite figure out the equation, but it was there. It wasn’t race or gender or even size…it was something else. Some of it appeared to be socio-economic…most of it looked like it could be body language. As I watched, I tried to imagine what it would be like to be someone who constantly moved out of the way (or was pushed…it was the day before Marathon Monday) for someone else. I bet you would feel smaller by the end of the day. And then I tried to imagine if there were barriers, and not gates, in your way all the live-long day.

I’ll never know what it’s like to move through life as anyone other than me. None of us can. But I was reminded Sunday, as I sipped a cold beer, soaked up the sunshine and listened to the crack of the bat, that we all move through this world differently…and experience the same things in very different ways. I can’t do much about that, but I can at least understand that it is different. Maybe the best we can do is to acknowledge our blessings, and try to make someone else’s journey easier. To give them a gate, where there could have been a barrier.