Last night, we had a dinner guest. Now, this guest is family, but we don’t see her very often and so I was hoping for an easy-breezy visit to make up for the last time she came to dinner…6 years ago. Let me just roll back time and set the scene for you…

THE SCENE:  That evening, one of our chickens was dying from some sort of unidentified chicken disease. The children were pretty attached to this chicken. Her name was Penny, after a pet chicken my Grandmother had as a child growing up on a farm in Vermont. (Yes, our chicken had a family name. Obviously.) She was very sweet and they were very sad and so they had made a nest of wildflowers and straw for her, loaded her into a wagon and were circling the house singing to her as they picked flowers and placed them in the wagon. For HOURS. It was all very sweet, but yes, essentially there was a chicken death march going on at my house for the entirety of her last visit. Of course there was. In the middle of this, child #3 found a bird who had apparently died a rather violent death and proceeded to snuggle it against himself and bring it into the house screaming for me to fix it. Which, as you may have guessed, I was unable to do as “bringing things back from the dead” is not on my list of skills. And THEN, child #1 went up to change into pajama pants (why before dinner? I don’t know. Maybe she was done with the day. Maybe the mourning wore her out. It was pretty low on my list of concerns right then.) ANYWAY, when she put her pj pants on, there was a yellow jacket in the pant leg. I don’t know how, I don’t know why…but there was.  There was a lot of screaming and running and then some more screaming.  It was about 5 minutes after that that our guest left. I think she was probably afraid to see what else would happen. Maybe we’d had dinner, maybe we hadn’t…I really can’t say. All of this happened in the space of about 2 1/2 hours. It was a bit of a whirlwind. I just remember trying to decide if it was better to explain that things weren’t always this crazy or to just roll with it because, yes…they kind of are.

So LAST NIGHT I was determined to put our best foot forward. Or a better foot. Any foot, really. We were almost all showered by the time she got here and the children were on their best behavior…for the first hour anyway. Things were looking good. Then, “The Bickersons” showed up to dinner and she got a front row seat to children arguing about who was sitting where and why and who’s my favorite (Spoiler Alert: It changes, but it’s pretty much always whoever ISN’T fighting in front of company.) And then it happened.

Her: So, are you planning to have any more children?

Me: (gazing lovingly at my cherubs as they attempt to hip check each other off the ottoman that they’re “sharing” for no good reason since there are at least 10 other seats available) No…I think I’ve maxed out at 3!

Child: ACTUALLY, mom refers to her purse as her fourth child. She loves it so much that she lets it ride on the passenger seat and we have to sit in the back.

Other child: No…sometimes she sets it on the thing between the seats and lets us sit up front! And then, when she hits the brakes, she places a hand lovingly on the purse to keep it safe. I guess she assumes we’ll be okay because of the seatbelts…

Hey kids? Lets try to keep the crazy tucked in when company visits…mmmkay?? Because YES, I did let her ride shotgun that ONE day….but only because she asked…or maybe because she was the only one not bickering… 😉 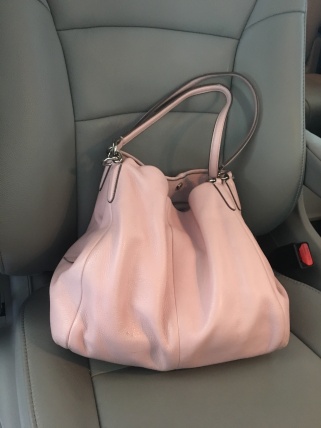 The Fourth Child….on her rightful throne.